In an effort to control stormwater runoff, and clean the water before it flows into streams and rivers, new Green Infrastructure is being installed at various locations in Greenfield. Two recent projects include Bioretention Basins installed at Creekwood Park and at Konkel Park. The projects were funded with grants from the Milwaukee Metropolitan Sewerage District.

Bioretention basins are infiltration devices used for the treatment and infiltration of stormwater runoff. The basin is made up of several layers, which treat stormwater by filtration through soil. These basins remove pollutants and reduce runoff volume. They are best suited to treating small drainage areas adjacent to runoff source areas, such as parking lots or streets. The project at Creekwook Park will treat runoff from the recently reconstructed 43rd Street. The bioretention basin at Konkel Park will filter the water from a parking lot near the new volleyball courts, before flowing into the nearby wetland and Honey Creek. 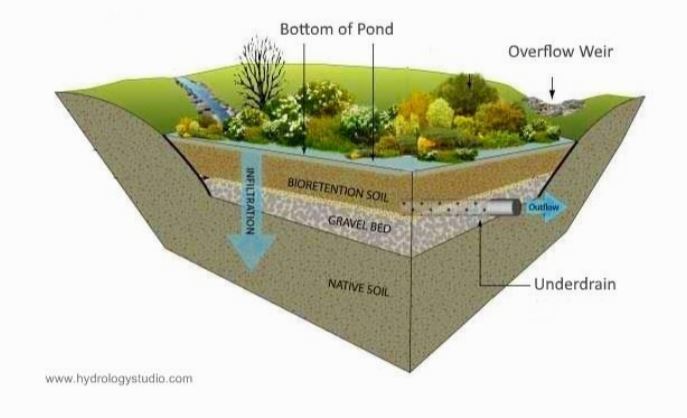 During a rain event, stormwater runoff will pond up and be temporarily detained. Initially, the water will pass through a vegetation layer which can consist of either grass or flowering plants. The primary filtration occurs as the water passes through a layer of engineered soil composed of sand, compost and topsoil. The filtered water then enters a layer of stone or gravel. A perforated pipe allows the clean water to flow out into an adjacent ditch, storm sewer or wetland. To regulate the maximum ponding depth of the basin, overflow devices such as a standpipe or weir are installed.